The beginning of a lifelong friendship with my computer 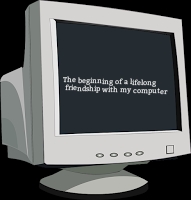 My first experience with a computer was as a young man, in the early eighties when I was to go for further studies.

As part of my studies I wrote a program in BASIC (Beginner's All-purpose Symbolic Instruction Code), my first introduction to the mysterious world of computing.

It was wonderful, writing all the code and seeing it work as if by magic.

A program written in text could manipulate a machine which would accurately and repeatedly plot graphs for the data entered.

Later on I decided to type out the thesis myself which meant that I had to learn typing. Happily the funds I had were enough to purchase a simple computer which had coincidentally just become available in the market!

It was an Amstrad PCW, a computer working on an operating system called CP/M (Control Program for Microcomputers). The computer had  a RAM of only 256 KB!


What is more the Amstrad PCW came with dot matrix printer,
which was great, as being able to print meant I could type out my thesis in the comfort of my home.

I learnt to touch type by using a typing tutor program which came along with the computer.

Something which just a few years before would have required painstaking typing on a manual typewriter could now be done so easily and so conveniently. And by oneself.

Around that time another computer had just become available in the market. We would see it sitting in the shop window. A beautiful IBM machine which one wanted to buy. Alas it was more than twice the cost of the Amstrad PCW.

This IBM computer worked on an operating system called DOS (Disk Operating System) instead of CP/M.

As time passed the IBM computer became the machine of choice and the older CP/M based machines were no longer available in the market.

The DOS based computer later came to be known as the PC (Personal Computer) and is called the same till this day.

Though one could sense it at that time, however, it was not entirely clear to a lay observer like myself; that we were witnessing the birth of a new era which would bring affordable computing power into the hands of most people on the planet.

To me the great and simple joy, at that time, was being able to, so easily, type out my thesis, amend it, correct it, improve it, print it: all of that in the comfort of ones home. 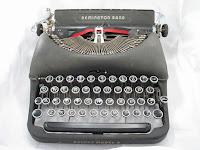 It was a really welcome change from what we used to do earlier, doggedly typing and retyping on a manual typewriter, a machine  which needed special finger movements with the constant risk of your finger disappearing between the keys.

It was a cumbersome job and one could get it done only from a typist, which would take hours .

In contrast, how easy, how simple, the easy glide which we now experience when our fingers move effortlessly across a computer keyboard.

It was really a matter of how it changed a tiring task, of commuting up and down to a typist. And a typing error meant there would be another trip back to the typist. All this was now replaced by a simple few steps to my study table. What I remember, all these years later, is the great sense of relief I felt.