Fitbit blaze not charging and not setting up: how I resolved this issue

'Fitbit blaze not charging and not setting up'.

I did an internet search for this issue and found many solutions on the various community threads.

None of these were able to help me solve the particular problem I was facing.

The issue was resolved, to my great relief, when my son suggested that I do the initial charging of my Fitbit Blaze directly from the charging adapter connected to the mains instead of through the USB of my laptop.

I am sharing this blog post to help any one else who faces a similar problem.

Photo of the charging method which did not work for me is given below. Here the initial charging when the initial setup was being attempted, was being done by connecting the Fitbit Blaze charger to the USB of a laptop. This method did not work for me even though I kept trying for a few hours. I kept getting the message from my Fitbit Blaze that the setup could not proceed as the battery charge of the Fibit Blaze was very low. So I was in a situation that the Fitbit blaze was not charging as for charging to happen the setup had to be completed, however the setup could not be completed as there was no charge in the Fitbit Blaze battery! 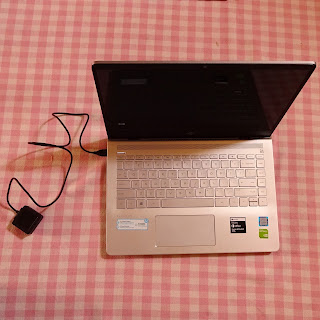 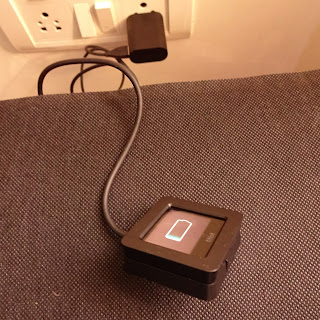 Please note, though, that once the initial setup is completed, the Fitbit Blaze charges from the USB drive of a laptop as well.

Having solved this issue I find that the Fitbit Blaze is a wonderful and useful device. I was using a fitness app on my smartphone earlier. Having a device which is like a wrist watch and gives prompts, which help in enhancing fitness, is a new experience for me.

I find it very useful. It becomes a friend of sorts.

Technology which is really helpful.

at February 15, 2018
Email ThisBlogThis!Share to TwitterShare to FacebookShare to Pinterest