Getting around: freedom of a commute 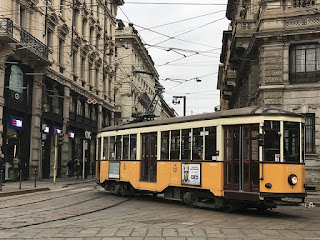 Gurgaon which is a suburb of Delhi got connected to the Delhi Metro some years ago. The yellow line of Delhi Metro now whisks you into the heart of Delhi. It was very different before the metro arrived. Living in Gurgaon meant you had to have your own transport. There were very few buses. So even though you were near Delhi but you were far.

The metro changed the life of a person living in Gurgaon. It set you free.

I recommend a trip on the yellow line of Delhi Metro from Gurgaon to Chandni Chowk. You will travel through distance and also though time.

From a modern suburb which came into existence only a few decades back to the heart of Delhi, a place which has existed forever.

This very same trip, from Gurgaon to Chandni Chowk, by road was tough before the metro. It is now a pleasure.

The neat and clean metro, air-conditioned and comfortable will take you to Chandni Chowk metro station and back for a cost of just 1 USD. More importantly the metro moves on exact time. With trains every few minutes you are assured you will get one.

The Delhi Metro is a mass transport system which is a great success. A system which has immensely improved the quality of life of residents of Gurgaon and of all of Delhi.

On a recent trip to Europe we used the public transport system extensively. In Milan, for example, we really enjoyed moving around in the trams. The older trams with wooden interiors were specially a treat.

We had been to Europe earlier. The trams were there those days as well. It was difficult to understand the routes. Figuring out the routes of the metro system was much easier those days. We landed up using the metro all the time.

This time around we could use the trams. The technology of routes being suggested by Google Maps made this possible. And a tram ride was so much better. As a visitor, it allowed us to see the city as we traveled. The flavor of our visit changed. Trams have been there for a many years. Now we could use them, even as visitors.

A wonderful freedom to commute.

My daughter, who is an architect, gave an insight. She told us to compare two places in Milan. One with trams and side walks and the other with no trams and wider roads. The side with trams was less car friendly but more people friendly. It was the first time I saw this aspect of a city.

A few decades back Gurgaon,, where we live, got connected to Delhi through a new expressway. This road is ideal for cars moving to Delhi. It cut down the driving time considerably. It is a boon for cars. But, it has divided Gurgaon into two halves. Getting across form one side of the expressway to the other for pedestrians is not easy.

So a city designed for cars becomes less of a city for pedestrians.

We are traveling to Canada these days. We are living in a suburb of Toronto. There are wide and beautiful roads. There is hardly ever a traffic jam. Every thing is spacious. You always get a place to park your car. There is a bus system. However, it is a bit like what we would feel when we were in Gurgoan before the arrival of the metro. Having a car is essential go get around.

The boon of a public transport system really sets you free.

Setting up a public transport system having trams and metro trains and buses is expensive. But when it comes, it changes the lives of people for years to come. Specially the people who are unable to use cars for some reason.

So a big thank you to all those wonderful people who make a public transport system happen.


Also see my post: It is much easier to travel an see cities now. The foot path beckons: walk and see nature.
at June 16, 2018
Email ThisBlogThis!Share to TwitterShare to FacebookShare to Pinterest