Why are e-rickshaws such a success story in India? 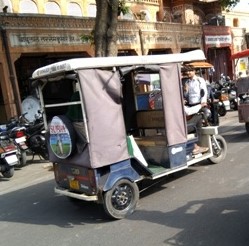 E-rickshaws are now seen almost on every road in any city of India. This is a phenomenal increase in the number of these electric vehicles . Market sources say that there are 1500000 e-rickshaws on Indian roads[1].

On the other hand if you look at the other electric vehicles which are manufactured by automobile companies they have not yet penetrated into the Indian market in large numbers; so why is it that the e-rickshaw has become such a success?

There are many reasons for this phenomenon.

To start with in the year 2015 the rules were changed and e-rickshaws were permitted to run on roads. This gave a big impetus to the sales of e-rickshaws.

An e-rickshaw is a pretty simple vehicle. It uses lead acid batteries, an induction motor which gives the drive to the rear wheels through a differential, and there is a controller which controls the speed of the motor and therefore the vehicle. The motors are of approximately 800 w and lead acid batteries are easily available. On one charge the e-rickshaw will run around 80 odd kms. The max speed of 25 kmph. It is, therefore, a pretty simple vehicle.

The best part is that an e-rickshaw can seat 4 passengers along with the driver. It is available in the market for about INR 100000 which is less than USD 1500. Running cost is cheap and so it is viable for a person to earn his livelihood by running an e-rickshaw. And also it is plugging in to complete a huge need in India, that is the last mile connectivity.

While in big cities we have got the Metros which quickly transport large number of passengers, there is a shortage of reasonably priced transport for last mile connectivity. In fact e-rickshaws have largely replaced the pedal rickshaws which were earlier available for this purpose.

People are buying e-rickshaws because it is a technology which is easily available to them and e-rickshaws can be used for earning their daily wage and it is easy for them to use it.

As the technology required to produce an e-rickshaw is available within the general technology threshold of the Indian ecosystem. Much automobile designing is not needed. This has allowed a large number of small firms to manufacture e-rickshaws. This also keeps the costs low and makes e-rickshaws affordable.

Another aspect is mass manufacture. For a normal EV setting up a factory for mass manufacture is an expensive proposition. And then you have to market in numbers. But in the case of the e-rickshaw a very large number of small firms manufacture e-rickshaws thus making them available in the numbers required.

These e-rickshaws almost literally market themselves.

Hence the number of e-rickshaws you see on Indian roads have ballooned and you see them everywhere in all cities.

PS.
Also see my blog posts:
My take on the future of EVs
Incentives and infrastructure for Electric Vehicles in India:
Electric Vehicles in India: we are at a cusp of change
E Rickshaw shows the way: an electric vehicle success story
at November 25, 2019 No comments:
Email ThisBlogThis!Share to TwitterShare to FacebookShare to Pinterest
Newer Posts Older Posts Home
Subscribe to: Posts (Atom)